While looking through pictures of John & Sherry of YoungHouseLove's living room, I spotted this fun rhino from Cardboard Safari. 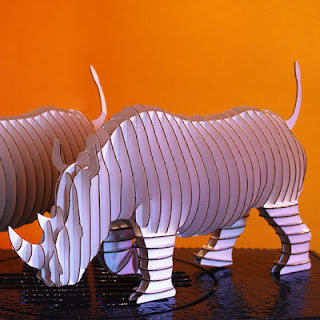 Of course, this is a sophisticated rhino and the medium version cost $30. While many of my close friends understand that I have an obsession with white decorative items, I knew I wasn't going to spend $30+ on a cardboard rhino. Maybe in a future life, but not as a recent college grad living without a bed frame (a problem I have recently remedied).

So, I set off to recreate the decorative appeal of the white rhino! Thanks to the wide selection of crafting supplies at Michael's, I went to work. 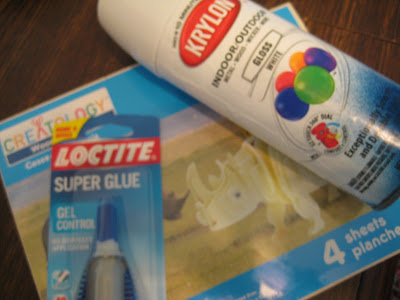 I purchased some Super Glue, high gloss white spray paint and a wooden 3D rhino puzzle for ... $3! The rhino took some time to assemble especially since I kept confusing his left legs with his right legs. 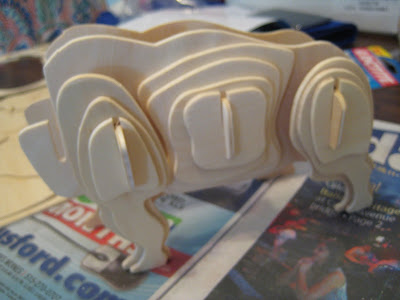 After putting the rhino together, I brought him outdoors for a couple coats of the high gloss spray paint. I'm sure regular paint would have worked as well, but I wanted him to be more dramatic. 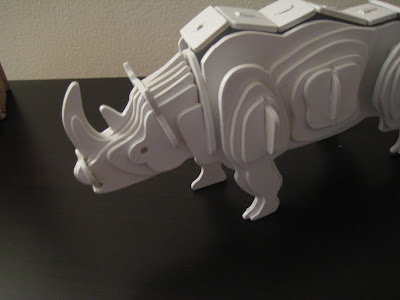 Worth the $27 savings? I know it's not entirely the same look, but the concept it the same. I'm pleased with the results and the fact that I got to release some of my creative urges in the process.

Michael's also has a lion and elephant that I had my eye on. Maybe a high gloss apartment safari is in order? However, my roommate may already think it's a jungle living with me without adding glossing African animals into the mix.
Posted by Rita at 2:42 PM

Rita
I am an aspiring accountant that has a passion for expressing myself creatively and doing so as thriftily as possible. I don't know anything about decorating except that it is fun and addicting!